Readers around the world are buzzing about Sara Farizan’s new voice in teen fiction – fans of David Levithan will definitely want to read this coming of age story.

“This novel was intriguing. It takes place on the opposite side of the world from where I live and it has an interesting and definitely accessible plot line. I liked this book because it brought some current-day issues to light. ”
–MacKinsey

“Throughout this strong debut, Farizan weaves in details of daily Iranian life, exposing the various opportunities available to people depending upon their academic prowess, financial status, social class, and sexuality.”

“Accomplished and compassionate . . . A groundbreaking, powerful depiction of gay and transsexual life in Iran . . . An intimate look at life in modern-day Iran and its surprising Westernization, even though much of this culture is clandestine.”
– Booklist, starred review

“[A] terrific debut novel . . . Rich with details of life in contemporary Iran, this is a GLBTQ story that we haven’t seen before in YA fiction. Highly recommended.”
– School Library Journal

“This beautifully crafted young-adult novel offers timely insight into the struggles of those who must be their authentic selves no matter where they live.”
– Ms. Magazine 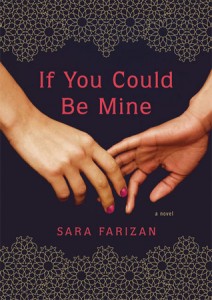 Seventeen-year-old Sahar has been in love with her best friend, Nasrin, since they were six. They’ve shared stolen kisses and romantic promises. But Iran is a dangerous place for two girls in love—Sahar and Nasrin could be beaten, imprisoned, even executed if their relationship came to light.

So they carry on in secret—until Nasrin’s parents announce that they’ve arranged for her marriage. Nasrin tries to persuade Sahar that they can go on as they had before, only now with new comforts provided by the decent, well-to-do doctor Nasrin will marry. But Sahar dreams of loving Nasrin exclusively—and openly.

Then Sahar discovers what seems like the perfect solution. In Iran, homosexuality may be a crime, but to be a man trapped in a woman’s body is seen as nature’s mistake, and sex reassignment is legal and accessible. As a man, Sahar could be the one to marry Nasrin. Sahar will never be able to love the one she wants in the body she wants to be loved in without risking her life. Is saving her love worth sacrificing her true self?

You can also check out an excerpt provided by the publisher before you purchase the book here!

If You Could Be Mine is available on our shelves at BookPeople and via bookpeople.com!