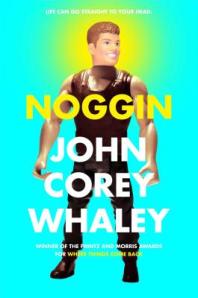 Travis Coates is alive. He closed his eyes, and when he opened them, five years had passed. His friends are five years older, and he is still the same age. His girlfriend is engaged to someone else. Travis Coates volunteered to undergo Cryogenic Reanimation after being told he was dying from leukemia. His head was chopped off, put in a freezer, and then put onto someone else’s body. Now Travis’s world has turned upside-down. Why did everything change? How can he go back to his old life—the happy life where he HAD a girlfriend? In a thought-provoking, unique story, Travis is trying to figure everything out; and reclaim the old life he once had.
What I thought about it:
Noggin was wonderful. It was such a quirky, fun read. This book was so weird—but incredible at the same time. This book has such an absurd concept—but you fall in love with it, and it is amazing how the author came up with this. You almost feel bad for Travis—the poor guy almost died, had to be in a freezer for 5 years, got a new body, and now his best friends are in college and his girlfriend is engaged. :O This book was very much a love story as well as a sci-fi book—it is largely about him trying to get his old girlfriend back. Poor Travis. Chasing after his past, to make it like it was before. I really loved the love (see what I did there?) in this book. It added a great touch to to the book. If you are a fan of YA, and/or sci-fi, DEFINITELY pick this book up. You WILL love it. I will definitely read John’s other books!

*We have signed copies of Noggin available. Call, come on in, or visit or our website to purchase.