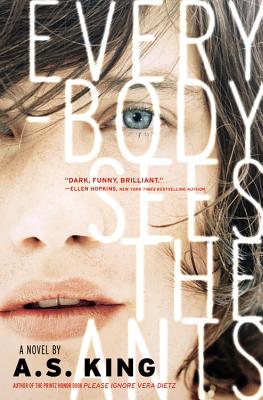 The story takes place in modern times with an insecure, wallflower, sixteen year-old boy named Lucky Linderman. Having a father who never pay attentions to him and just the culinary arts, Lucky has no one to go to when he is horribly abused and bullied repeatedly by a classmate. During summer vacation he is whisked away with his mother to visit relatives he has never met. It’s the perfect escape route from his father, but before Lucky leaves, the bully strikes him again at the pool, causing a lasting physical wound across his right cheek.

Since he was wounded that day, strange things begin occurring. Lucky sees dancing ants, who also comment on his life, wherever he looks. But only he can see and hear them. At night, Lucky’s has dreams depicting his grandfather – who hasn’t been seen since the Vietnam War – as a captive and Lucky is his only savior. These dreams become an escape, a way for him to survive his nightmarish life. Lucky soon learns hiding won’t fix the problems he is faced with, and he’s not the only one with a strange and tormenting secret.

This book is brilliant. And that’s not an exaggeration at all! Of course, it is A.S. King – anything by her is a work of literary art. But this book really gets to me. I remember that as I finished the last few pages, I began weeping. My mother came in after hearing me and what a sight she saw – red-eyed me, clutching this book to my heart.

The characters haunt me, specifically Lucky. He is dark and mysterious, but I see pure strength within him, no matter how small he seems to be. The way his dreams connect with this horrific reality he calls “a life” is still a mystery to me. When I picked up this book I knew I was going to love it but not nearly as much as I actually do.

For teens and adults alike who have dealt with bullying, loss, love, and hatred, this book will rest in your heart peacefully. Funny, witty, and hauntingly beautiful, Everybody Sees The Ants is a tale for anyone who will listen to Lucky’s voice.