Neal Shusterman Is Coming to BookPeople!!!

Neal Shusterman has a new YA book coming out this month called Challenger Deep. It has been getting a lot of buzz because it’s not in the same style as Shusterman’s other books we all know and love, but a little something different and equally amazing. Challenger Deep is a deeply powerful and personal novel. A captivating  story about mental illness that lingers long beyond the last page, the novel features haunting interior illustrations by Shusterman’s son Brendan. Neal Shusterman will be in the store April 30th, at 7pm  discussing this book, which officially comes out on April 21. Check out this amazing trailer!!!

So as some of you guys know, ABC Family has picked up production of Shadowhunters, a new television series based on The Mortal Instruments series by Cassandra Clare. This is good news, yes, but do you guys remember that movie that came out oh, a year ago called The Mortal Instruments: City of Bones? And do you remember that amazing cast of that movie . . . yes? Well, that cast has been erased and they will be casting new faces even though I can’t see Magnus Bane being played by anyone other than Godfrey Gao!!!!! Although, this is bittersweet news, I am glad that this series will be returning via small screen and the story will continue. That’s all that matters right?

Can we just say that this looks amazing??!!! Check out more about the book, the movie, and how the book’s author wrote the film adaptation in this feature from Publishers Weekly. 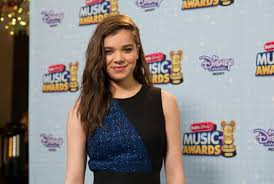 It was recently announced that the YA book, Break My Heart 1,000 Times by Daniel Waters is being adapted into a movie! The movie is being describes as The Fault In Our Stars meets The Sixth Sense. Yes, please!!! The film could potentially become a YA franchise that will star Hailee Steinfeld who you may have seen in Ender’s Game and Pitch Perfect 2. The screenplay will be written by Jason Fusch, and directed by Scott Speer. Speer has some knowledge of YA because he is also the author of the Immortal City series. This just sounds like all kinds of awesome and we can’t wait!! More about the pre-production here.

Tis the saddest day for all lover of the books and T.V. show and spin-off series of the Vampire Diaries. Nina Dobrev announced that she will be in fact leaving the Vampire Diaries t.v. show and this will be her last season. Why? Who knows? But there are more pressing questions such as . . . will they continue on with the series? How can they continue on without its main character? Will anyone watch it without Nina on the show? What will happen to the spin-off show, The Originals? So many questions but no answers, but we hope to get some soon! This is one of our favorite TV shows and we will forever hold a grudge about this. LOL! More of the article here.