Emily Pinkerton is a soon to be graduate of St. Andrew’s Episcopal School. For the past three weeks or so, she has been an intern at BookPeople. She helps out in the kids section, receiving, and all other areas of the store. She has shared her experience and insight with our staff about self-publishing her novella, Orianna. We asked her to share her experience with you, as well.

I began working on what I originally thought would be a full-length book my freshman year of high school. The idea presented itself when I was on a hike with my family and we passed an area of small, shriveled trees and I wondered how they would look if it began snowing at that instant. This was the central image to the novella, and it appears at the beginning and end of the story. 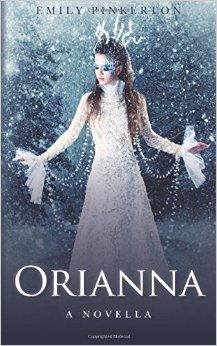 Doing the actual writing was not the hard part. The hard part was finding a way to get this project out in the publishing world. I’ve always wanted to publish something of my own, and I also thought colleges might be impressed, so I continued. When I finished the writing, it was winter break of eleventh grade. I waited until the summer to begin the publishing process because I knew it would be difficult and time consuming. At first, I thought self-publishing would be my safety net and that I would only resort to it if I had no other options. I didn’t think I could ever earn back the money I would have to invest into paying a company to edit, bind, and produce my novella.

I sent the draft to a small publishing company here in Austin to see what they thought. I knew I couldn’t get a big-name publisher to even look at it, so I went local. I didn’t expect them to agree to do anything with the draft, but a couple weeks later, they called me and I freaked out. They wanted to have a conference call with me and my mom the next day. Unfortunately, they asked for a significant amount of money, which didn’t feel right to me. Immediately I knew they were trying to take advantage of my age and lack of experience. I called back the next day and told them that I was going to self-publish instead.

My Mom & I took to the internet to search for different self-publishing companies that would help with editing, the layout, the cover, and even help with the selling process.  Here’s how the process went: there would be two rounds of editing, I’d get to choose between two cover ideas, I would select the size and general formatting of the book, and then they would tell me how much I would make off of every book sold.

Around a month later, I got the final copy in the mail and was told that it was ready to be printed according to the demand. I was nervous to tell people outside of my family about it because I was afraid of being judged. Since I wrote the majority of it when I was 15, I didn’t feel like it was a good current representation of my writing. I especially didn’t want my teachers to read it. When a friend announced my book during chapel assembly, everyone in the school knew and there was no turning back. Teachers, friends, and other students I didn’t know very well ordered the book. I did a little lunch presentation shortly after people found out, and I was astounded at the amount of people that came out to hear about my novella. Even my old middle school had me go give a talk in their library.

I know that there are other kids considering publishing some of their own writing, and I say go for it! Even with the initial embarrassment at my school, the reaction was very positive and it might have helped me get this internship at BookPeople. Not many teenagers want to put themselves out there and do something different, but I promise doing a project like this will open up doors and also teach you about the book world, which I didn’t know much about. If you ever find yourself looking for something to read, then look for Orianna by me!