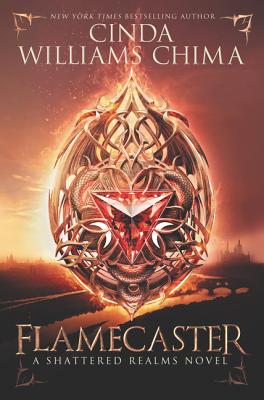 Jenna is something special. She can’t burn, she’s immune to magic, and she sees things about people with just a glance. Yet none of this prepared her for the murder of her friends by the king, or for her role in a sinister deal.

Ash is a prince and a mage, whose family is being picked off by a menace- the King of Arden.  After his father’s murder, Ash goes into hiding, waiting for his moment, which comes in the form of a healing job in the palace.

When their stories clash, they must fight to survive against the king, a mysterious empress, and schemes that would shatter their world as they know it.

A story of magic, power, and wit, Cinda Williams Chima seamlessly merges her characters tales into one action packed story. Each character’s POV is easy to distinguish, and added amazing dimensions to the novel. Although the story focuses on Ash and Jenna, there are two other POV’s that give us more information on the king’s plots, and show us what goes on behind closed doors.

Flamecaster  is a spin-oof that takes place in the same universe as her Seven Realms series. It deals with the problems that weren’t resolved at the end of that series. This chapter of the ongoing saga takes place in the kingdom of Arden, which for long time readers gives you a view of the enemy, and for new readers, gives you a fabulously done kingdom. Arden is a place of poverty and misery that clearly shows how evil this King is. Cinda Williams does an excellent job of not overdoing descriptions, but giving enough to form decisive pictures in your head.

All in all, it was a fantastic read with interesting and diverse characters, an awesome plot, thrilling twists, and an amazing writer behind it. Now that I have finished Flamecaster, I begin my wait for the sequel. And if it’s half as good as this one, it will be worth the wait!