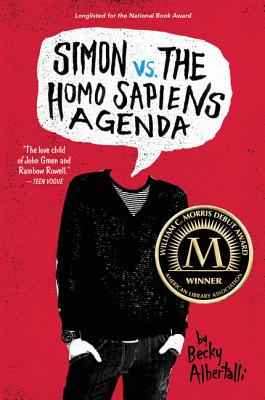 Simon VS. the Homo sapiens Agenda is about Simon Spier, a sixteen year old who is not so openly gay.  He lives his life and saves drama for the school musical until an email falls into the hands of class clown Martin. Martin blackmails Simon thus causing Simon to become his wing-man or risk his and Blue’s, the boy he has been emailing, sexual identity being thrust into the spotlight.

What a better way to celebrate the recent Supreme Court Marriage ruling than with an amazing LGBT book?  This book was amazing!  It is quirky, adorable, hilarious, and better yet, truthful to how it feels to be gay.  The reason I love this book is that it shows the real life of a gay teenager and the things he has to face in high school.  Any LGBT person can relate to Simon in one way or another. The confusion of high school romances, the bullying that most LGBT teenagers face, the fear of having people judge you, and what it feels like to be in love.  Most of these things are universal for teenagers but LGBT teens face these things in spades.  I celebrate this book because it faces the tough issues in a LGBT teen’s life without being insanely graphic or depressing.  It tells other LGBT teens that they are important; they deserve to be represented, and that life is not as bleak as many people think. In a time when LGBT YA books are becoming more popular, it is time for everyone to be represented accurately and wholeheartedly and that is exactly what Becky Albertalli does. She has given us a groundbreaking book that I believe every teenager should read.  Because no matter your sexual identity, this is an amazing story that should be shared and loved.