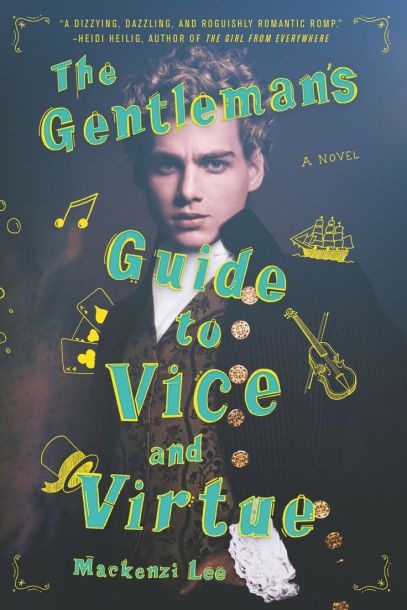 The Gentleman’s Guide to Vice and Virtue

Pirates, alchemy, and an adventure across Europe, who wouldn’t want to read that book?  Luckily, Mackenzi Lee has all that and more in her new book, The Gentleman’s Guide to Vice and Virtue. Born into England’s high class, Monty is expected to be a gentleman and take over his father’s estate when he comes of age.  However, rather than be a gentleman, Monty would rather visit less than reputable bars and wake up next to strangers. His family decides he’ll do a year-long Grand Tour of Europe and take over the estate when he  returns.  While not excited to run the estate, he is thrilled about going to the Continent.

His hopes are initially dashed when his father adds a strict leader to the party, Mr. Lockwood. In addition to Mr. Lockwood, Monty will be joined by his best friend (and the guy he’s crushing on hard) Percy Newton and his bookish little sister Felicity. Nevertheless, Monty is still determined to make his Tour a time to remember. After one of Monty’s little stunts leads to him, Percy and Felicity getting separated from Mr. Lockwood, the three are chased through Europe by an ex-member of the French court.

I absolutely loved this book! I had heard a lot about it, and was a little worried about it not living up to all the hype. Luckily, it far surpassed my expectations. The characters were witty, sweet, and had me laughing out loud. Monty can be a little insensitive at times, but I was so glad to see his character develop throughout the novel. The unrequited love between Monty and Percy was also super sweet and I loved the dynamic between them.  If you’re in the mood for a fast-paced, thrilling adventure I would definitely recommend this book!