All Out: The No Longer Secret Stories of Queer Teens Through the Ages 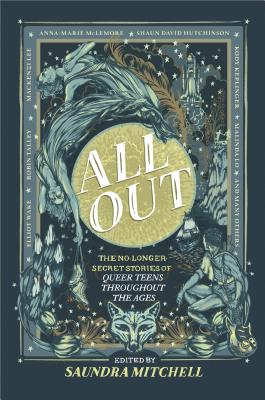 “For you, happiness is being with a man. For me, happiness is being among friends. Love takes many forms, Will Scarlet. If I must lie to the world to be true to my heart, then I’ll lie. I’ll cheat, I’ll steal, and I’ll do it with a smile. Love is the only higher power I answer to, and my love is no less for being chaste.” – Elliot Wake, from Every Shade of Red

All Out: The No-Longer-Secret Stories of Queer Teens Through the Ages contains seventeen stories packed with racial, sexual, and gender diversity from around the world and across time. Diverse historical fiction seems like an oxymoron, but these bestselling YA authors are here to prove that assumption wrong.

McLemore’s Red Riding retelling was cool and emotional. I’m in love with the characters, even though it’s a short story. She captured a transgender person in the 1800s as perfectly as one can, and he being in the military was pretty topical as well. The girl’s poisonous powers were also pretty cool, and the fact that her ferocity is based on a real historical figure blows me away. All in all, a promising start to the anthology.

Parker’s pirate tale was a miss for me. It was too short to really be much of anything, and the two characters just automatically being in love seemed unrealistic. I get that she wanted to include a kiss, but it didn’t work. The unresolved ending was strange, and I wasn’t sure where one character stood on gender, sexuality, or even willingness to be a pirate. Not my favorite, but a good try, I guess?

And They Don’t Kiss At The End by Nilah Magruder

Magruder’s asexual 70s roller girl was awesome, confused, and honest. Even if she didn’t know exactly who she was, she embraced the now and had fun, which is awesome. Her friends and crush all supported her, which was cool, if unrealistic. I could picture the vibrant roller rink easily, which I always appreciate. I generally like short stories that take place in the same setting over the whole story, and this one did.

Lee’s gay Amsterdam painter boy story was fairly cringe-worthy at certain parts, but it was cute, concise, and full of sexual tension. (i.e. classic Mackenzi Lee). I liked the idea, and the setting she described came to life. A painting studio was a good choice, as it provides all the interesting details and cool words you need. I also like that she chose to portray younger teens in a very I’ll Give You the Sun-style way.

The Dresser and The Chambermaid by Robin Talley

Talley’s Downton Abbey-esque lady’s maid adventure was fun, if completely unrealistic. I don’t know any time period where a king walking in on two women making out would end in him saying “Carry on, ladies.” But, I did enjoy the scene where they did each other’s hair, however cliche. I think Talley attempted to cram too much of a plot into a short story, but it was still pretty good.

Lo’s 50s Chinese New Year story was interesting but read more as a description of the time period and less of an actual story. I’d already read about the lesbian clubs of the 50s in a different short story collection, but I enjoyed hearing about them from another perspective, and I did learn about the Chinese-American computers who worked at the Jet Propulsion Labs. (Which shows just how much info this story includes.)

There was nothing particularly special about Adler’s 90s story of discovery other than the excessive Nirvana references. The story was even called Molly’s Lips and featured a girl named Molly whose friend longs for (surprise) her lips. I did enjoy seeing the cult-like mourning that I assume was based on what really happened when Kurt Cobain died. There was much flannel, much vinyl, much tears, and much smooching.

The Coven by Kate Scelsa

Scelsa’s 20s witches were weird and spooky and not very immersive. I didn’t understand what was going on half the time, but I did enjoy the idea of the fortune-telling woman, and how they cleansed the main character of… something? I don’t really know. 20s Paris seems like a really cool setting, but when I don’t get any more description than “fog,” I can’t really see what’s happening. (Hahaha… fog jokes)

Every Shade of Red by Elliot Wake

Wake chronicles a trans Robin Hood and a deaf Will Scarlet who are in love, so he has definitely been reading my dream fanfiction. (Interpret that phrase as you will.) This story was happy and sad and too short, so now I want to read an entire book of it. (It left off on a cliffhanger, so…) He manages to insert gender, sexual, and racial diversity into one of the most white-cis-male dominated stories ever written.

Tracey’s 1700s witch thing wasn’t exactly my cup of tea. The ending left me wondering what the heck was going on, and I didn’t understand the magic system in the first place. I didn’t know where the main character felt about anything, and he seemed to be there only as a reader surrogate instead of an actual character, which is valid in some cases, but not in a YA short story.

The Girl With the Blue Lantern by Tess Sharpe

Sharpe’s magical 49ers were fun if a bit boring. I guess the conflict was that the father was kinda bad? And something was gonna happen if she joined the girl? I did like how the lover had gold powers, and the imagery of gold dust swirling through the air is really cool. I also liked that they didn’t have to kiss for us to know that they were in love since the other stories have all tried to slam in a dramatic make-out scene.

The Secret Life of a Teenage Boy by Alex Sanchez

Sanchez’s hippies were cool, if pretty random. I liked that the focus and conclusion of the story wasn’t based around a relationship like in all the other, but instead on the main character’s acceptance of self and coming out. I also felt very immersed in the story, since the whole thing took place over about an hour, and was in a very small setting, I could imagine it easily.

Walking After Midnight by Kody Keplinger

Keplinger’s 50s movie star was awesome, and her night spent walking with a small-town waitress was adorable if a bit vanilla. The in-your-face Singin’ In The Rain references kinda took me out of the story, but I think the author just really wanted a scene of the girls singing and dancing the street, so whatever. The waitress’s motives for wanting to get out of her small town were interesting and realistic.

Farizan’s 1999 New Years was cute and cliche. The chances that they both had forgiven each other, both were into girls, and both liked each other are very small, but magical things happen on New Years, I guess? Was that the moral? The comment about the Columbine shooting, and how they thought it would be a one-time thing was chilling and poignant, and I wish the author had included more current-event comparisons like it.

Gratton’s Spanish convent lesbian was fierce and admirable, and I enjoyed how the story was told from three different perspectives. The way the word witch was used as a surrogate for lesbian was an interesting, if slightly strange, choice. I appreciate how the main character was proud of her love, and how she believed that she was doing nothing wrong. The sweetness of the ending was ever so gratifying.

The Inferno & The Butterfly by Shaun David Hutchinson

Hutchinson’s 1800s magician’s assistants in love were cool and cute and pretty terrifying at times, but I appreciated his raw honesty. The fact that one of the boys actually had magic was kind of boring to me, since the whole point of stage magic is that it isn’t real magic, and he kind of took the mystery out of it, but whatever. I’m always a fan of a pickpocket turned magician, though, so you’ve got me there.

Mejia’s 30s Mexican healer girl was cool, but confusing at times. Sometimes when authors try to be too abstract in their description you can’t get a full sense of what’s actually happening in the story, much less whether or not anything going on is real. I did like the main character’s relationship with her grandmother, though, and how the embracing of her powers was also the embracing of her sexuality.

Overall, All Out was an awesomely diverse ride that brought together a complete spectrum of sexualities and genders to a YA audience with perspectives throughout time, place, class, and race. A joy to read for any kind of YA fan, and a must-read for any queer teen out there.