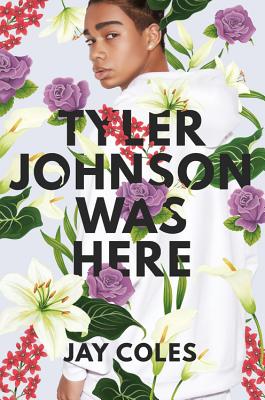 “Tyler Johnson Was Here” by Jay Coles in three over-simplifying words: sad but true. This work of art is written in response to Police Brutality and the Black Lives Matter movement. This book drops you bottom first in Marvin Johnson’s world, where you meet his fraternal twin who is closer to him than his heart is to his ribcage. You meet his two best friends, and his strong-willed mother, a picture of the hardest love known to man. He and his twin Tyler are the kind of fraternal twins that had their lives intertwined. Their memories were shared. They grew up together sticking up for each other in the hood the grew up in called Sterling Point. Their neighborhood is home to drug dealing as well as gangs. This is their home. Their life.

Marvin is the nerdy twin. There’s no way around that one. He wants out of Sterling Point, away from the police shootings and bullies at school and the drug dealing that got his father wrongly convicted and sentenced in a correctional facility. And while Marvin and Tyler are impossibly close, Tyler is the sociable, amiable twin that goes to parties and participates in sports. He talks to lots of people. When some of the people end up being the wrong people, Marvin feels Tyler float away before he sees it. His brother sees Tyler running with the wrong crowd. The drug-running kind of crowd that makes him come home late and act real weird and quiet like he suddenly has secrets.

Marvin sees it as his responsibility to make sure his brother does not make a fatal misstep with said druggies. Tyler invites Marvin and his friends to a party that his new friends have thrown and Marvin decides that it would be better to go and watch out for Tyler than to stay home. After that party, the entire story shifts. The story goes from a monologue of two brothers to a monologue of one.

This book is heartbreaking. There have definitely been times where I needed to take a break. There are scenes of violence, some of which seem almost exaggerated. But the truth of the matter is that the scenes of police brutality, prejudice, and the hatred have already happened. They happen somewhere in a corner store, or at a school. It happens to children younger than seventeen.

This book is realistic. It shows it isn’t just a YA novel. This is realistic fiction. “Tyler Johnson Was Here” is All American Boys meets The Hate U Give.

This is a tale of strength as Marvin learns how to navigate grief. His narrative has taken my breath away with the depth of emotion he feels. The way he not only grieves, but also finds strength by advocating puts a smile on my face. Marvin goes from the quiet boy at the back of the room to a brave young man who refuses to stay silent when change must be made.

This novel will definitely put readers through a lot, but for a cause. Because all of it is true, no matter how we wish it wasn’t.