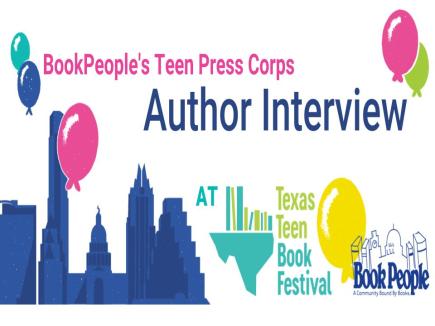 Ivy: How did you know you wanted to be a writer?

Andrew Smith: I never wanted to be a writer, I just always wrote so I don’t know what it’s like to want to be something that you already are. I’m the first born American son of an immigrant. My mother didn’t speak English when I was growing up. And my mother learned how to speak English about the same time that I started going to elementary school when I was learning you know, how to make letters and words and so on. I just was always fascinated with that writing and words and language. So it was never something that I even questioned or ever even really thought about. This is going to be my future. Because to me, it’s just my identity. It’s just what I am. It would be kind of like saying, like, Oh, I remember when I first wanted to be a human being.

I: How do you get your ideas for your books? Where does that come from?

AS: I don’t know. I mean, you know, again, from the earliest age, I think I’ve always felt like the universe sends me signals and I respond to those things. And sometimes they’re really positive and sometimes they’re really negative. And sometimes they’re just kind of like, you know, just boring, banal and, and those things end up in my stories. I mean, like a loss of broken cell phone turned into this connection with some stranger. Three years ago there was someone who I keep getting phone calls and text messages for. And he is the secondary protagonist in Rabbit & Robot because of that, so I just kind of respond to, you know, what happens out there in my life and, you know, the kinds of people that I bump into, and the other objects that are kind of like floating around in space.

I: Did you think when you were a teenager, you would have read your own books?

AS: I wrote books when I was a teenager, they were terrible then, embarrassingly bad and I wish I really do wish when I was when I was younger that somebody would have written some of the books that I wrote because I felt so alone often in my life. I felt so isolated and on the fringe of everything and I didn’t really have an understanding that I could articulate about where that feeling had come from. I knew that I wasn’t like other people and I couldn’t find any kind of like any messages from the universe about people like me. I think that when I was a teenager I wish that I could have read some of the books that I as an adult had written, but that’s kind of a time travel question.

I: Are there any parts of your books that are, I mean you sort of talked about the text messages, but inspired by your life?

AS: All of my books are autobiographical in one sense or another. And so then they all reflect my experience and again, some of them are a lot closer to home than others. I’ve had, you know, really close friends in my life who told me like, Oh yeah, I couldn’t finish reading this book because I could tell it was really too personal you know, not because it sucked or anything, but they were almost like embarrassed to get such an intimate glimpse into things that they knew really did happen to me and were really strong connections with myself now and in the past.

I: How did you know you wanted to write Rabbit & Robot in particular?

AS: Rabbit & Robot was informed, again by a bunch of things that were going on in my life about three or four years ago that drove me to ask a lot of questions about things where we are right now as a society in terms of our economic system, our educational system, and the impact of such rapidly advancing technology and what the impact of that is on human beings because, you know, I’m old and I’ve seen this kind of depreciation of the value of humanity at the expense of all of the technology that we’re so connected to. And as much as technology has always been seen as, you know, having the promise of it’s going to bring us closer together, I think it’s driven us further apart. I start the book with the quote from Erich Fromm that says, “Education produces machines which act like men and men who act like machines,” and I think really that kind of sums up where I was when I started writing Rabbit & Robot and where I am today. 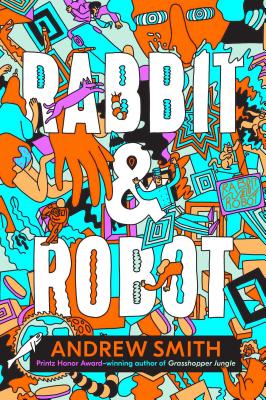 Rabbit and Robot is on sale now!