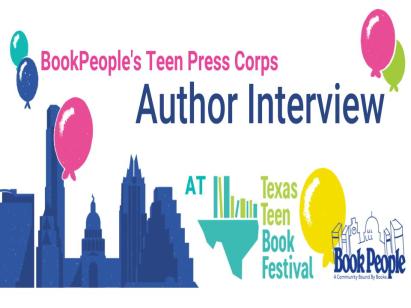 Karen Cramer: So what inspires you to write?

Samantha Mabry: Um, sometimes that’s hard to answer, because a lot of times as a working writer you’re writing because you told someone you’d write like, you have a book and you have to write it. But so answering the question is like, what inspires me to write in the first place, that’s really what I tap into when I don’t want to write, but I have to write, you know, and so I was always a big reader. I knew that I wanted to be an English major in college, when I knew that that was the thing that people did. And so I thought I would be an English teacher, which I also am currently, but I just always wanted to read and so I just love to get lost in worlds and wanted to create a world of my own. And so whenever I’m feeling really pessimistic about like my writing currently, I just go back to books that I love that I think are just the most perfect things in the world. And then try not to copy those which are just sort of tap into the feeling that I felt when I read them and try to write hoping that when someone reads my books, they’ll feel the same way.

Harriet Butler: Are there any books like in those moments that you specifically always have?

SM: Sure, yes, there is a book called The House of The Spirits by Isabel Allende, I think of that a lot. And there’s a writer named Annie Dillard, and she doesn’t write novels, she writes creative nonfiction essays. So they’re like nonfiction short works and personal essays, and she has a collection called Teaching A Stone To Talk. And in that collection, there’s an essay called The Deer at Providence, which is about like, I guess this is going to sound really morbid, but it’s about a deer that’s tied to a tree like she’s, she’s in South America, or Central America, like in the woods in the jungle. And so they’re going to slaughter this deer and they’re going to eat it. And it’s about this, like this deer. And I just sort of think about the way that she writes- I think, is the most perfectly written thing. And so they’re very different writers and very different styles. But those are the two

KC: what is the first story you remember writing?

SM: Well, when I first started writing, it wasn’t fiction. And it was kind of like, I wanted to be Annie Dillard in that time and write these nonfiction stories. And I wrote an essay called Outlaws. And it was about like, a true story about this guy that I used to know who worked for the company that my mother worked for. He was like a driver, like he was like a Lyft driver. Someone who works for the company, right? And so, sometimes he would like take me to the airport if she couldn’t or whatever, pick me up from the airport. And it turned out that- he would do this in like this Maroon minivan, and it turned out that- I found out later that he was robbing banks with the company minivan. And like he’d always have this poodle with him, like this dog, I think named ginger and she would brace herself up against the side of the seat, because one time when she was little he slammed on the brakes too hard and she like, flew to the dashboard. And so now she like always like braced herself for impact. Anyway so I have this like, this is crazy, like this person and this dog and they would use this Maroon minivan to go rob banks. And so I somehow like told this story and tell the story about Bonnie and Clyde also, like I thought it never really came together. But that was the first thing that I really tried to make really good.

HB: If you weren’t a writer, what would you want to be?

SM: Um, you know, I’m a teacher. And so I like doing that. But sort of lately I’ve gone back to liking to do things with my hands like creatively and I took a class in welding and so I’d like to maybe be a welder and I would make like, not stuff like this, but like fabrication, welding, where you design chairs and make chairs and stools and stuff. I would like to make furniture.

KC: When you first saw the cover art of All the Wind in the World, what was your first thought?

SM:  Sometimes your publisher will say, like, send this ideas for your cover. And I had sent them an idea that was like, nothing like the cover. So my first thought was like, that’s not at all right, like that. I have no idea. But then it grew on me a bit all one in the world. I had some comments that they took into account, like, it’s kind of it’s blue and orange. And it used to be like, kind of pink or like almost the color of your bag there. It was, like fuchsia and so I was like, ‘Can we make that less pink?’ And then there’s two people at the bottom of the cover who are facing away from each other. And at the beginning, they were facing towards one another and I thought, that looked like to kissy kissy like it looked too love story like, like I’d seen covers like that before. And so I asked if they could be turned away because I felt like you could still know that they’re together. But there’s like a story there. And like maybe that’d sort of build tension. And so they did that. But then for the paperback, they turned them back.

SM: I don’t. My editor has changed both of the titles of my books. So A Fierce and Subtle Poison was my first book. And I called it Leaves, like leaves on trees. But that book was inspired by a short story by Nathaniel Hawthorne called Rappaccini’s Daughter, and my editor went back and read through Rappaccini’s Daughter and the phrase “A fierce and subtle poison” is in that. So we both thought that was pretty, pretty good. And we chose that. All the Wind in the World was called The Real Marvelous, which is the name of the ranch where the story is set. I think I did that because I wanted it to be like a Western. And a lot of western movies are called like the place where they take place and so that was significant to me. They said they didn’t like it because they said it sounded like it didn’t sound like what the books should be about. And so a friend of mine who read it suggested All the Wind in the World, which she thought was a line from it, which it’s not, it’s a variation of a line in it and so we went with that.

KC: Where is your favorite place to write?

SM: Basically sort of where All the Wind in the World is set. Which is set in the future, but it’s set in a real place in Far West Texas where my husband and I have gone every summer. It’s Marfa, Texas, which is El Paso, and it’s really desolate and there’s not a lot there. And I usually spend my mornings kind of reading over the previous day’s pages. And I take a walk kind of through the desert and then come back and write new pages and like sit in a hammock. So like a lot of people like to go, ‘how did you come up with the setting’ was I really like was in a hammock for hours. And every day, things in the wind would blow. And I would like to think about what that was. So my favorite place of writing it was like sitting in the hammock, which wasn’t writing it was like thinking of the story. And then I would like type it out.

HB: Do you have any hidden talents.

SM: The welding thing is a pretty hidden talent. I used to be a yoga teacher. And so I can like kind of do tricks.

KC: And if you could choose one song to sum up your book, what would it be?

SM: My song, I don’t know if it sums up the book, but it sums up the mood of what I feel about the book. And it’s a song called An Ocean In Between The Waves, and it’s by a band called The War On Drugs.

HB: What can readers look forward to hearing from you next?

SM: I turned in a draft of my next book to my editor just on Monday. But it I sent it in with a caveat that was like, this is a book in that there is a beginning, a middle and an end and I typed the end of it, with like, a lot of skepticism because I feel like it needs some work. But it’s basically set in San Antonio. I’ve never written a contemporary novel like a real-life novel, maybe it’s like my best shot at it, even though there’s a ghost in it, because I can’t just be real, but there was four sisters. One of them dies for the action of the novel that kind of truly starts and so it’s been the three of them for a year. And then the novel starts a year later to the day that that sister died and she comes back to haunt the house. And so the three sisters are very changed from this year without their one sister and then they’re trying to figure out like what’s going on in the house. 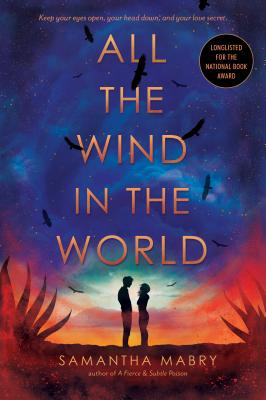 All The Wind In The World is on sale now!