The legacy of Becky Albertalli’s novel Simon vs. The Homo Sapien’s Agenda is not to be understated.

It made waves for queer representation in young adult fiction and was adapted into Love, Simon, the first film made by a major studio to feature a gay teen romance. As Simon and company graduated in Leah On The Offbeat, fans assumed this would be the end for the beloved and now iconic characters. 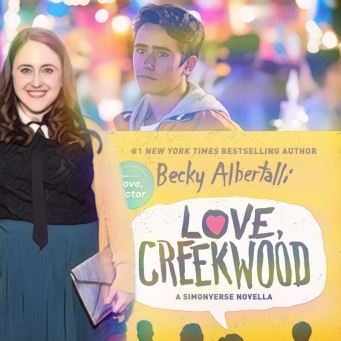 Love, Victor was the first hint at an extension to the universe, a spinoff series from Love, Simon based around another queer teen boy growing up in Creekwood. The show was originally set to air on Disney+ and was one of the reasons I was so excited about the new streaming service. Unfortunately but not surprisingly, Disney backed out at the last minute and now Love, Victor will be finding its happy home on Hulu June 19, smack in the middle of Pride month. Becky Albertalli doesn’t seem to have a major role on the project, but it’s still inspired by her Creekwood universe and diverse storytelling.

In addition, Becky recently announced that she will be releasing Love, Creekwood, a Simonverse novella mostly likely spurred by the release of Love, Victor. However, this makes the story no less welcome, as it’s set to be written entirely in emails between the gang in their first year of college. It may not be the hardest-hitting emotional rollercoaster of a book, but I’m sure that a happy, nostalgic, generally wonderful story is something we could all use right now.

With a teaser clip for Love, Victor already out and Love, Creekwood set to be released on June 30th, Becky is a gift that keeps on giving. Plus, she’s donating 100% of the English-language royalty advancements from the novella to the Trevor Project. While Becky Albertalli may not be queer herself, she is a near-perfect example of an ally and her delightful stories are sure to keep me smiling this summer.