“And you hate that word. Control. You hate that word because it is so very rare that you have any. Over your life, your sexuality, your gender, your pronouns, your heartbeat when you’re around a beautiful girl.” – Kick. Push. Coast. by Candice Montgomery

As a massive fan of Out Now: Queer We Go Again’s predecessor All Out (read that review here) I was happy to find that this installment was just as joyful, tender, relatable, and revolutionary. Saundra Mitchell has once again assembled the Avengers of LGBTQ+ YA authors to prove their worth, and prove they do. The previous anthology focused on historical fiction stories while this book contained more modern tales, which was perfectly fine by me. 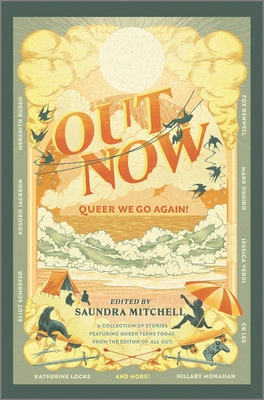 Standouts were Caleb Roehrig’s “What Happens in the Closet,” the inspiration for his upcoming The Fell of Dark, Tanya Boteju’s “Floating” which followed a neuro-divergent teen discovering romance, Meredith Russo’s “The Coronation” about trans kids in a grim future, and Tara Sim’s tale of bakery magic “One Spell Too Many.” My favorite was “Once Upon a Seastorm” by Fox Benwell as it told the story of a trans boy who suspects he is a selkie.

It’s hard to make generalizations for so many stories beyond the fact that they were all thoroughly entertaining, sometimes sweet, sometimes sexy, and brought endless joy and pride to my heart. While I’d love this series of LGBTQ+ anthologies to continue forever, I am equally excited about the work of authors I’ve discovered in Out Now and truly hopeful for the future of queer YA.