“‘You know what I think? I think sometimes the stories we need are the ones about taking the hobbits to Isengard and dog-human dudes with space heelies and trashy King Arthurs and gay ice skating animes and Zuko redemption arcs and space princesses with found families and galaxies far, far away. We need those stories, too. Stories that tell us that we can be bold and brash and make mistakes and still come out better on the other side. Those are the kinds of stories I want to see, and read, and tell.’”

Imogen Lovelace is on the hottest panel at ExcelsiCon with the cast of the most popular sci-fi movie of the time: Starfield. The only problem is she should be back at her mom’s booth in the exhibition hall since she definitely isn’t a movie star. Jessica Stone, portrayer of Starfield’s Princess Amara is the girl Imogen accidentally impersonates. This once-in-a-lifetime slip-up snowballs when the script of the next Starfield film is leaked and Jess wants to purposely swap with Imogen in order to hunt down the troll and save her reputation. Imogen agrees because, like, it’s Jessica Stone, and finds herself dazzled among the Hollywood stars she’d previously written Tumblr posts about. Both girls learn about each other’s worlds of fame and fandom and learn, as any good Prince and the Pauper tale will teach you, that nothing is as it seems.

I read Geekerella when it first came out in 2017, so I didn’t remember too many details. 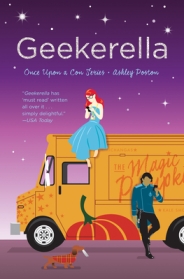 Fortunately, the world of ExcelsiCon felt like home as soon as I started reading Princess due to Ashley Poston’s accessible style and descriptions. While there were more than a few Geekerella references thrown in, overall they weren’t confusing and only added another layer for those who had read the companion novel.

Princess’ characters are smart, unique, and fully formed. Jessica is complex and well-written while staying likable. In comparison, some of Imogen’s actions were less relatable but she certainly felt realistic and an amalgamation of all the best parts of fandom, coupled with an innocence that triumphantly shattered over the course of the novel. The side characters were also unusually wonderful, Jessica’s PA and Imogen’s brothers deserving of their own spinoffs.

YA novels about fandom will never go out of style because fandom is constantly evolving Princess chronicles a specific moment in time with as much joy as it can muster, which I appreciate unconditionally. Cynics writing about fandom will never capture the excitement, (the epic highs and lows) authentically. Plus, community events like the fictional ExcelsiCon are impossible right now, so getting to read about that environment was a cherry on top.

Overall, The Princess and the Fangirl is pure fun and deeply heartfelt. Any nerd or even those nerd-adjacent can appreciate the honesty and joy infused into every page of this novel. While it started it with a typically look-a-like-mix-up, the story soared with romance, humor, and an ultimately well-timed and encouraging message about community and acceptance.

For fans of: Chaotic Good by Whitney Gardner, Hot Dog Girl by Jennifer Dugan, Ship It by Britta Lundin