We are highlighting our favorites moments of 2015! Back in October, on Halloween day, we had the one and only actor and writer, Jason Segel in the store! He came to talk about his newest book in his children series titled Nightmares!

~post by Mia
Jason Segel was 20 minutes late, but that didn’t stop his fans from being super excited upon his arrival. The first thing he said when he sat down, was that Austin is one of his favorite cities, making the crowd cheer. The 2nd floor of Book People was packed with witches, wizards, secret agents, dinosaurs, fairies, pirates, mad scientists, superheroes, firefighters, and more,

ranging from little kids to adults.
Jason Segel’s first book, Nightmares!, came out last year. The event held at Book People this Halloween, was to celebrate the release of the second book in the series, Nightmares! The Sleepwalker Tonic.  For many years before  Nightmares! was made into a children’s book, it had been a screen play that Jason wrote when he was 22. It stayed a screen play for a while, but with the help of Kirsten Miller, he was able to turn it into a children’s book about facing and conquering your fears.
During his interview, Jason explained that he wrote the Nightmares! series to show kids that having complicated thoughts, feelings, and fears that they don’t understand is okay, everyone has them. Jason had the audience laughing through most of his interview as he told stories about growing up at an awkwardly tall height, and the complications that came with having a Jewish father and a Christian mother.
The Nightmares! series will end with a third book that is projected to come out sometime next year. Jason hopes to then be 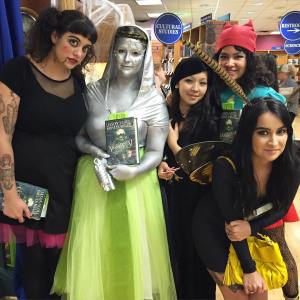 able to make his books into a movie trilogy. After the Nightmares! series is complete, Jason and Kirsten plan on writing another series, this time for teenagers, about virtual reality.
The event was fun for Jason Segel fans of all ages, bringing in over 250 people, at least half in Halloween costumes, to meet him and have their books signed.

Fun Facts We Learned About Jason Segel During His Interview:

-His favorite monster is Dracula.
-His favorite scary story is Scary Stories to Tell in the Dark
-The recurring nightmare that Charlie has in Nightmares!, about witches eating his toes, is the same dream that Jason Segel had as a child.
-Jason Segel wore a superman cape under his clothes until he was 10, when people asked him why he was wearing it, he would reply “Just in case.”
-When he was young, Jason Segel could always be found with a book in his hand.
-Jason Segel has been 6′ 4″ since he was 12 years old.
-When the script for Nightmares! was first written, Jason Segel planned for the characters to be played by the cast of “Freaks and Geeks”.