That picture is from Amie Kaufman’s Tumblr, and is an example of the part that makes this book so cool. It’s set up as a report from a group called Illuminae that is doing recon on the invasion of Kady and Ezra’s ho 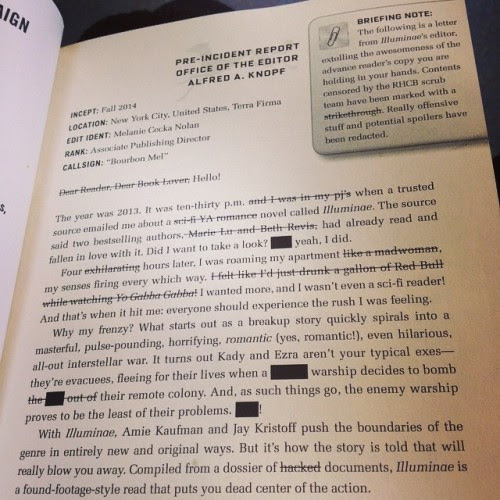 me planet. The collection of files are a mixture of images, reports from pilots, chat conversations between Kady and Ezra and Kady and her hacking mentor, and transcripts of surveillance footage. At first I was worried that I wouldn’t be able to follow the story through seemingly random documents, but I was quickly proven wrong. I became invested in Kady and Ezra’s relationship/non-relationship as well as the overall survival of everyone in the book.

Illuminae is essentially a survival story. It’s a story of refugees and of thousands of people trying to survive a coming attack from an enemy ship. It’s a story of Kady and Ezra trying to survive in a new life so very different from their old one. Kady becomes a hacker trying to save her people and Ezra becomes a pilot and a part of the military. The plot of this book is insane – in six hundred pages you go through numerous near-death experiences, battles, crazy new character, and threat after threat. You see Kady and Ezra fumbling to figure out what they mean to each other – are they still in love? Can they ever be together again, despite them being on two different ships?

I loved Illuminae. It was different, exciting, breathtaking, and addicting all in one. AIDAN, the Artificial Intelligence Being made me love it, despite all of the things it had done, and I fell for Jimmy, wanted Kady and Ezra together ASAP, and couldn’t put this book down.

Put Illuminae on your TBR ASAP. It’s one of the coolest books to hit the shelves this year.